An early decision for newcomers to make is whether to learn not just golf croquet, but also how to play the more formal game, Association Croquet. Whatever the decision, there are basic considerations that are common to both forms, and for which it will be helpful to seek the guidance of  an experienced coach.

Basic skills to master, are how to grip the mallet, and how to address and strike the ball. After this it is necessary to learn how to consistently run hoops, and how to adjust the swing and its strength to the distance the ball needs to travel, and to the condition of the lawn. A high standard of accuracy is essential. It is vital to learn to keep one’s head down, and one’s body still during the stroke. Then too, there are specialised strokes such as stop shots and jump shots to include in one’s armamentarium.

What are the essential differences between the two games to bear in mind when choosing which to play?

Association Croquet is usually played with a two and a half hour time limit; a game of golf croquet can usually be completed in about 40 minutes.

In Association Croquet just one player at a time is allowed to occupy the court, until their turn ends. The most skilled players are able to extend their turn by so positioning all balls as needed to be able to continue to run hoops in sequence. In golf croquet, players are allowed just one stroke per turn, and balls are played in a set order of play. As soon as one player runs a hoop, all players move on to the next one. As a result, the game is played in groups that move together from one hoop to the next, allowing plenty of time for chit chat. Sledging however is not in the spirit of the game.

Golf croquet is a skilful game involving careful ball positioning, roquet shots, (striking an opponent’s ball to perhaps hit them out of position), and hoop running.

Croquet shots in which the striker ball being played is struck whilst in contact with another ball(s) add an additional level of complexity and interest to Association Croquet.

Association croquet can take months to master, and indeed years to learn all the intricacies and strategies that can be used. Golf croquet on the other hand can be played after as little as an hour or two of guidance.

It is not surprising that in today’s world with so much pressure on our time, golf croquet has become the more popular form of the sport. Indeed many clubs might have had to close but for the shorter form of the game, with more opportunity for social interaction.

The basic equipment for croquet comprises:

It may seem an easy task to strike a ball through a hoop, but it is one made difficult by setting the clearance between hoop and ball at only one-eighth of an inch, or one-sixteenth of an inch for championship play. From the Oxford Croquet website: http://www.oxfordcroquet.com/tech/hoopspec/index.asp

Doubles players move on to the next hoop to be played.

Secondary Colours are green, brown, pink and white. Brown is stuck in the hoop.

Two games can be played simultaneously on the one court. Sometimes it is necessary to wait while the other group finishes playing the next hoop. 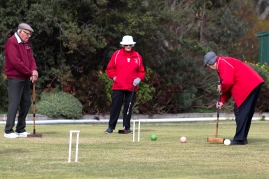 Bill Kidd and Patricia Hill watch whilst Valda Jaensch lines up her shot.