Mount Barker is only 35 kilometres from metropolitan Adelaide (population in excess of 1.1 million) along the South-East Freeway. Once a sleepy little township in the picturesque Mount Lofty Ranges, it is now becoming a commercial hub for the increasing population of the Adelaide Hills.

Dr Peter Byron Shepherd graduated from the Medical School of the University of Adelaide in 1957, he completed internships at the Royal Adelaide Hospital, the Royal Perth Hospital, and back in Adelaide at the Queen Victoria Hospital, an Obstetrics Hospital that was later replaced by the Women’s and Children’s Hospital at North Adelaide.

For a time he worked in partnership with Dr J Sinclair Smith in the large mining town of Broken Hill, just over the border from South Australia, in the more populous state of New South Wales.

Subsequently he settled in Mount Barker in 1961 to become a country general practitioner in the Gawler Street Medical Practice of Dr John McDonald  and Dr Ron Schaefer  servicing also the local Mount Barker Hospital. His was a busy, and varied practice and he was multi-skilled beyond the competence of more recent medical graduates. .

Dr Shepherd was highly regarded not only by his patients and their families, but also in the general community.  He remained a stalwart member of the local Baptist church, along with Ron Schaefer, bringing  Christian ethical ideals to his patient care. As Dr McDonald commented, he was not just a gentle man, he was a true gentleman in the broadest sense of the word. Not once was he heard to become angry. He was never rude or impolite to his patients and always obliging.

The current Mayor of Mount Barker, Ann Fergusson, speaking at his funeral service, remembered how when she worked as a theatre nurse at the Mount Barker Hospital, she appreciated his cheerful willingness to come in when needed after hours for surgical and obstetric emergencies.

Dr John McDonald became a firm and lasting friend of Peter as a result of their work association over so many years, and as a result of a shared enjoyment of croquet, a game in which he excelled.

Peter retired in 1997 to spend more time with his family. He also increased his church responsibilities and support of the Mount Barker Croquet Club.

Sadly in the year or two before he died, his health deteriorated quite quickly due to Alzheimer’s disease. He was eventually admitted to Flinders Hospital and then to a Nursing Home, where he died on the 11th August 2013.

The spacious chapel of the Carr and Kleeman Funeral Parlour was full with family, church and community friends at his funeral service on Friday August 16. Baptist minister Pastor Patrick Garton conducted a dignified service, followed by a private cremation.

He has been much-loved and will be long remembered by his family, his former patients, his practice partners, and his many friends. What better legacy of one’s life can one leave than this! 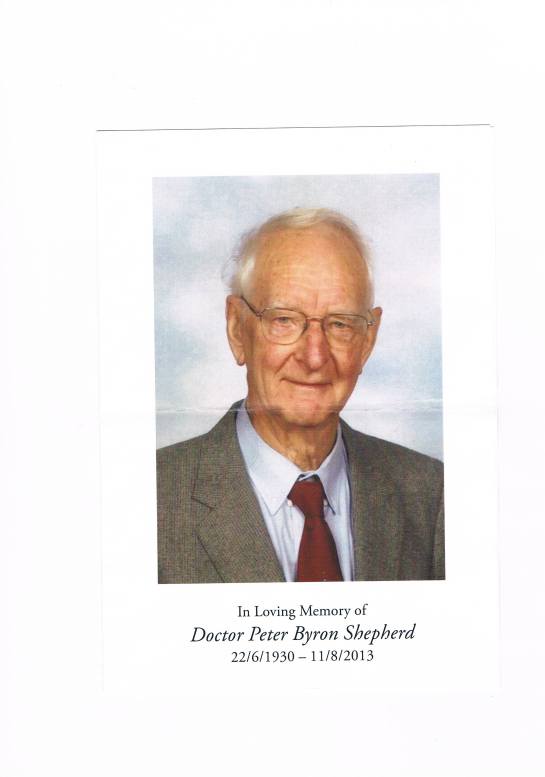